The following is a letter from former District Governor Rick Benson of the Westport Rotary Club. This project was started by Dr. Spiekermann. The Rotary Old Saybrook will support this project in memory of Al Lindquist, a long standing member who recently passed away.

Commonly not Rotary clubs, but research institutions, pharmaceutical corporations, well-stocked foundations and government agencies fight the spread of major infectious diseases, with mixed results. Smallpox was eradicated, to be followed soon by poliomyelitis, but malaria, for instance, has withstood efforts.   Recently, dengue fever has emerged as a major widespread infectious disease with more than 50 million new cases every year. Neither specific drug treatment nor any satisfactory vaccination is currently available or can be expected soon.

Dengue fever is caused by a virus, but unlike smallpox or polio virus the dengue virus exists in four types, and infection with one type does not convey immunity against the other three. In fact, re-infection with one of the other types seems to increase the severity of the illness and the risk of a possibly fatal hemorrhagic dengue fever. Attempts to produce a vaccine covering all four serotypes of the virus have been disappointing.

Dengue virus is found in tropical and subtropical parts of the world. Most infections (about 80%) produce minor flu-like signs and symptoms or are ignored. In the remaining 20% the disease manifests itself with often excruciating muscle and joint pain for which it was also known as break-bone fever. Victims are ill with headaches behind their eyes, alternating high fevers, chills, sweats and a general malaise. They may show a rash over the upper body, and in a small percentage the disease turns into its hemorrhagic form with frequently fatal internal bleedings and shock. Recovery in general takes up to six weeks and may be followed by periods of depression. The illness is debilitating and takes its considerable economic toll.

Dengue virus is transmitted from person to person by mosquitoes, and so is malaria. Preventing transmission is at present the only practical way to reduce the incidence of both diseases. Only female mosquitoes bite because they need blood meals to form eggs for the propagation of their species; males live on nectar from flowers. Mosquitoes require for their life cycle a phase as short as four days in standing water where they develop from egg to larva to pupa from which the flying insect emerges. The life span is about eight days for males, and about four to six weeks for females. However, apart from these common traits the malaria mosquito Anopheles and the dengue mosquito Aedes have characteristic differences. Anopheles, of humble appearance, is recognized by holding its rear straight up when stinging, at dawn and dusk. Aedes, stinging during the day, looks elegant with a white-striped lyre design on its black thorax. Their habitats and flying ranges differ considerably, and this is of decisive importance in our efforts to combat dengue. The malaria Anopheles is a field and swamp mosquito with a wider flying range than dengue Aedes which is a house mosquito in closer contact with people. By the nature of their habitats Aedes is used to and requires cleaner water for its breeding sites than Anopheles. Overall, the dengue mosquito is more accessible, less evasive, and thereby more vulnerable to elimination than the malaria mosquito.

Taking this into account in Indonesia, a country most affected by dengue, the Public Health office of Surakarta on Java collaborated with the local Rotary Club of Solo Kartini to develop a new non-chemical technique to interrupt the mosquito life cycle. It was implemented in a highly endemic sub-district of the city as a club-developed global grant  project. It was approved by The Rotary Foundation in May 2010 and completed successfully in September 2011. In the tripartite efforts of Rotary with Public Health and the target community it had become obvious that the personal participation by Solo Kartini members was and is indispensable. Rotary’s organization is uniquely suited by offering a standing service army of volunteers in close contact with communities everywhere. Rotary International’s “from the top down” initiative led to PolioPlus with Rotarians engaged countrywide in national immunization days. On the other hand, our “from the bottom up” club developed initiative in the form of a global grant project is in line with Rotary’s Future Vision too.

The basic difference between polio and dengue is that the goal of eradicating polio required a worldwide endeavor from early on inspiring and uniting all Rotarians, but not in long interaction with communities. The goal to eradicate dengue fever needs a local target by target approach, which is better served by a club-developed project with support from a global grant. Local Rotarians cooperate with public health staff to educate and instruct targeted homeowners thoroughly, and contact with their communities must continue until the virus is eliminated.

In the absence of vaccination and treatment for the foreseeable future, preventing transmission of the dengue virus from person to person by mosquitoes is a promising way to reduce the incidence of dengue fever. Areas of Focus are Disease Prevention and Sanitation. One element of the Solo Kartini non-chemical technique is increasing the color contrast visibility of the mosquito larva phase, the other element is intense repeat education of homeowners on the danger posed by standing water in and around the home. An additional factor to motivate compliance with the technique could be fear of the severe pain caused by the illness. This program presents a practical and environmentally friendly way to eliminate the virus, at the same time collecting measurable results and sustainability data. The outcomes must be judged with the understanding that dengue outbreaks occur in cycles requiring long term observation.

Dr. Paul Spiekermann spoke to our club at our meeting Sept. 4, 2013 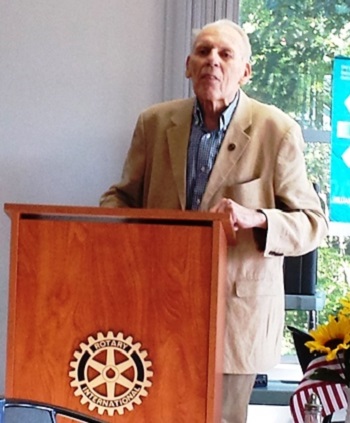 Join us in serving and improving our communities. Request more information and a Rotary Club application today.